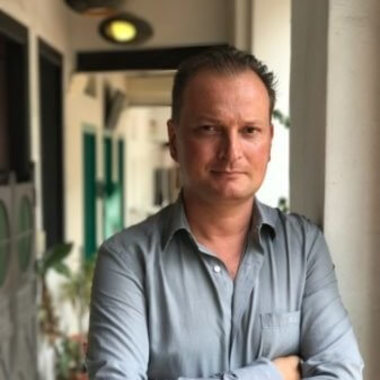 Taras Wankewycz is a serial tech entrepreneur with several tech ventures created in Asia during the past 15 years, ranging from deep tech hardware to software and services. As a third-generation French national of Ukrainian descent, Taras’ life journey spans various countries including the UK, Netherlands, France, US, China and now Singapore (8 years). Prior to turning to entrepreneurship in 2003, Taras worked at Eastman Chemical company at its European headquarters in The Hague (NL), where he led business innovation and was part of the corporate venture capital team.

Taras started his entrepreneurial journey in 2004, in Shanghai, China where he co-founded Horizon Fuel Cell Technologies (Singapore HQ), now one of the world’s leading hydrogen fuel cell technology companies supplying the fast-growing professional electric vehicles market in China, US and Europe. Adopting a platform approach, it all started with very small and simple commercial applications - the first being miniature renewable energy experiment sets for schools, and it evolved gradually over 15 years towards trucks and buses. The “think big start small start now platform” - is a key common thread to his entrepreneurial philosophy. Midway into his first company’s evolution, his team pioneered the use of hydrogen as a battery alternative for aerial drones. An aerospace-focused subsidiary began in Singapore in 2009 for which Taras took the lead in 2011, and which he later spun-off and purchased in 2015, creating the basis for his new venture: H3 Dynamics. He has since expanded towards fully integrated, grid-independent tele-robotics base stations for third party drones, capable of operating autonomously, sending video feeds or scans of our physical world to a cloud-based digital services platform, powered by a proprietary machine learning engine. H3 Dynamics has raised $13.5M so far, has recently opened regional headquarters in France and Texas, and is currently finalising its $16M series B round. H3 Dynamics were awarded top spot at BuiltWorldAsia in 2018, and the Asia Top 100 (Echelon) in Singapore in June 2019.